Carl and Richard chat with James Montemagno about his experiences building Xamarin applications. But first, a little history, James first getting involved in mobile development, finding Xamarin, culminating with being hired by Xamarin and going on the road trip with .NET Rocks! James talks about the kinds of apps he's been building using the tools, how he organizes his projects for cross-platform development, what's in his toolbox and what he's adding to the community-at-large to help developers be successful. 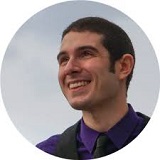 James Montemagno is a Principal Program Manager on the Xamarin team at Microsoft. He has been a .NET developer since 2005 working in a wide range of industries including game development, printer software, and web services. Prior to becoming a Principal Program Manager, James was a professional mobile developer and has now been crafting apps since 2011 with Xamarin. In his spare time he is most likely cycling around Seattle or guzzling gallons of coffee at a local coffee shop. He can be found on Twitter @JamesMontemagno, blogs code regularly on his personal blog http://www.MotzCod.es, and on the weekly development podcast Merge Conflict at http://mergeconflict.fm.