Carl and Richard chat with Matt Wynne about Cucumber, a tool for building requirement statements that are actually testable in your development environment. Matt starts out with a discussion about behavior driven development and how Cucumber evolved as a way to not only capture behaviors effectively but to actually make them part of the testing process using a language called Gerkin (and yeah, the whole show is full of pickle references). Matt also talks about SpecFlow, which is Cucumber for .NET and talks about all the different flavors of Cucumber out in the world. This naturally leads to a discussion about the state of Ruby since Cucumber started there. Great thoughts about how technologies evolve by branching and merging ideas! 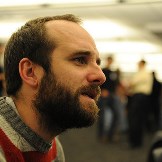 Matt started programming in BASIC on the BBC Micro when he was about 11 years old, and has been programming for a living since 1997. He’s the lead developer on Cucumber-Ruby, the open source tool for running executable specifications that help bridge the communication gap between business stakeholders, testers and developers. He’s co-author of two books on Cucumber, The Cucumber Book with Aslak Hellesøy and Cucumber Recipes with Ian Dees and Aslak Hellesøy. Along with Aslak Hellesøy and Julien Biezemans, Matt runs Cucumber Limited, the company behind the popular family of open-source tools that include Cucumber-Ruby, Cucumber-JVM, Cucumber-JS, Cucumber-CPP as well as the Gherkin parser that powers SpecFlow for .NET. The company also run a paid-for service called Cucumber Pro that offers a collaborative platform for teams using Cucumber. Matt is a founder of the Kickstart Academy which provides training and consulting to teams learning to use Behaviour-Driven Development (BDD) and other advanced agile practices. He lives on the west coast of Scotland with his wife, two boys, two cats and a few chickens.