Should we all be software engineers? Carl and Richard talk to Chad Michel and Doug Durham about the discipline of software engineering - separate from computing science and software development. Doug and Chad discuss the elements of lean engineering in software, referencing their book Lean Software Systems Engineering for Developers. The conversation digs into what it is to focus on engineering and the role of developers within the engineering system. There's room for a range of skills in development, and as Doug says, it's important to have a diversity of experiences and viewpoints to build great software!

Chad Michel wanted to create software programs since he was in the 8th grade. He graduated with a bachelor's degree in computer engineering and with a master’s in computer science. Since graduation, he has spent almost 20 years creating software systems. Chad is CTO of Don't Panic Labs, a small tech company that focuses on bringing innovators' product ideas to life. This role provides him many opportunities to help clients solve problems through innovative software solutions. He is very interested in creating more and better software professionals. He does this by teaching at UNL, conferences, and co-founding NeDL, which is an education partnership with Doane University. Chad co-wrote his first book called, "Lean Software Systems Engineering for Developers." Chad is a life-long Nebraskan. He grew up in rural Nebraska and now lives in Lincoln with his wife, son, and daughter. 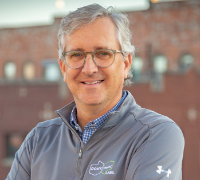 Doug Durham is the co-founder and CEO of Don’t Panic Labs, a firm that helps companies and entrepreneurs innovate through the design and development of software technologies. Doug has more than three decades of software engineering experience in a number of different industries. He is passionate about the process of solving problems through software, and the application of sound engineering principles and patterns to these efforts. Doug is a proud Husker and has an electrical engineering degree from the University of Nebraska-Lincoln where he has also taught in recent years. Doug has recently released his first book titled "Lean Software Systems Engineering for Developers."