Carl and Richard chat with Jeff Fritz about ASP.NET vNext - and yes, ASP.NET is now open source! So what does that really mean for ASP.NET developers? Jeff digs into the impact of taking open source on the development process of ASP.NET and how we can all get more involved! This leads to a discussion about the expanding reach of .NET into other platforms such as Linux using OWIN and Katana, and the Microsoft stack being a friendly place for developers of all kinds to hang out. Azure is also a big part of the future web story, and Jeff digs into the cloud-optimized stack and how you can get your web app there. 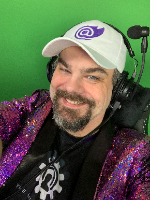 Jeff Fritz is a principal program manager in Microsoft’s Developer Division on the .NET Community Team where he leads development of live video and online content. He is also a Twitch and YouTube partner as well as the founder of the Live Coders stream team and the KlipTok web application. You can catch Jeff writing .NET Code with GitHub, Visual Studio, and Azure on his video stream called 'Fritz and Friends' at twitch.tv/csharpfritz