Lucian Wischik Enlightens Us on Async and Parallelism

At NDC in Oslo, Carl and Richard talk to Lucian Wischik about using Async and Await in .NET 4 and 4.5. Lucian talks through some great scenarios of how you can use Async and Await effectively, as well as the mistakes developers can make. Method blocking and Async don't get along! The conversation also explores the differences between asynchronicity and parallelism, they aren't the same thing at all. Get ready for some awesomely lucid thinking about Async and parallelism! 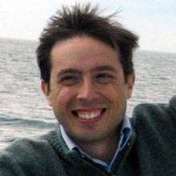 Lucian is on the VB/C# language design team at Microsoft, with particular responsibility for VB. He also works on compiler implementation of the features that get designed, and then works on fixing bugs in those implementations! Lucian has been at Microsoft since 2004.

Prior to that he took a PhD in concurrency theory at the University of Cambridge and worked as a researcher at Bologna University. He has a strong interest in concurrency and was one of the architects of the new Async feature in .NET 4.5. He's a keen sailor and long–distance swimmer. His blog can be found at http://blogs.msdn.com/lucian.